Kitsch, jail the prisoner for the modern lad – prison in prison!

Kitsch in prison is solitary confinement, kitsch in the zone (prison) is SHIZO (penalty isolator).

My next story will be about kitsch in prison, where women prisoners from the women’s corps (women’s prison) also go.

Punishment cells in the remand prison are located in the basement.

They contain violators of the regime on PVR – internal regulations in the remand prison. Such as “Deniers” – prisoners who do not accept the rules of the prison regime and despise the “asset”.

In the punishment cell are not only violators of the prison regime, but also those who “work jailers.” There are also those who, in the opinion of the guards, “boasted of their origin”, i.e. the prisoner was not only proud of his origin and position before the arrest, but also continued to behave in prison, thereby belittling the “important role of the jailers.”

Also here you can find prisoners “Snykov” and “cheremuha”. “BS-Niki” – former mi-police officers, investigators, judges and the like. “Sherstova, woolen” – it is the informers who are still on the loose “gave the Opera” their friends, associates and other, but still themselves in jail.

In the Shu are allowed to take with them only of: soap, tooth brush and paste, towel, toilet paper, vests and pants for the shift, one linen, the documents on the court with a pen and paper.

The official term of punishment in solitary confinement is from 5 to 15 days. But in fact, the prisoner may be there – for months! It’s called “through the mattress.” That is, when the sentence ends, the prisoner is “taken to the cell”, where he can only spend the night and the next day he is again placed “on the kichu”.

The camera is up to two meters wide and up to three meters long. In it: folding rack, sink, toilet and “perch” – a bench the size of centimeters! thirty by twenty. There is a window that resembles a window leaf from the window.

The mode of the day quiche (in the hole):

Search of the cell-punishment cell by guards on duty, at least three of them.

Then the jailers strapped to the rack with a chain to the wall so during the day the prisoner to lay on the bed, and the whole day was in a “standing position”.

You can’t sit on a perch for a long time and therefore you have to sit on the floor, in case the floor is not flooded with water in the punishment cell.

The mattress, pillow, blanket and bed belong to the prisoner himself, under escort, in a special room – like a clothing warehouse.

After the morning procedures washed-defecated, at 5.10 prisoners are taken for a walk in the prison yard.

In winter, the courtyards are dark and you can admire the night sky without seeing the bars. This is if the jailers will lead to a walking yard without a part of the roof. The walk can last from thirty minutes to an hour, it all depends on the guards and their mood.

Millet porridge with garbage-husks on the water and a Cup of tea.

8.00 – Inspection of prisoners by the prison paramedic because of the armor: “Alive? Healthy? There are no pills – do not pretend that you are ill!»

Only two dishes without tea.

Soup, which can be called slops. For the second barley porridge boiled with a piece starshego fat-fat.

16.00 – Another bypass and the survey of inmates by the duty wardens: “Questions, concerns, statements?»

After that, the prisoner goes to the storage for a mattress and bed.

And retreat to the punishment cells.

At night, the light in the cell is switched to the night lamp. But sometimes because of the “earnings” vile guards for punishment cells, have to sleep under two lamps, each in 95-100 watts.

All night, or rather every hour, the longitudinal cell opens with a crash pocket-feeder on the armored door and looks at the prisoner. Like, if he’s still alive.

You can imagine how “prisoners sleep in the punishment cell.”

Jailers, sending prisoners to Kichu, hope to intimidate and break the will of “Denied”.

But strong-minded prisoners, while in solitary confinement and punishment cells, find peace and tranquility.

“Resting on Keech!”- so say the authoritative prisoners.

I’m after a few punishment cells, said so:

“Thank you KICHE – my soul again gained faith in themselves!» 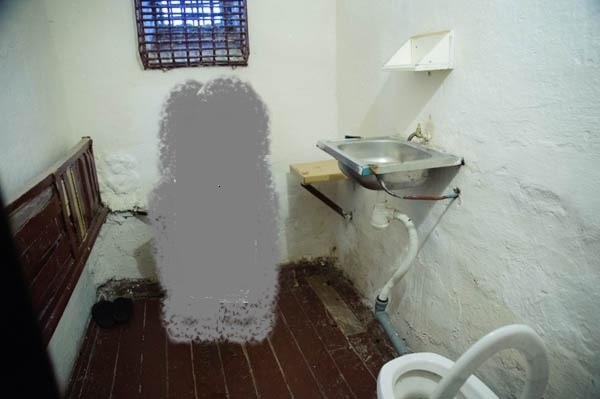 15 thoughts on “Foreword by Keech.”